The Tower of Bacon

Gentle Readers, sometimes, bacon is more than the flavoring, more than a garnish, more than a bit. Sometimes, bacon is the guest of honor. Recently, in my professional life, I had cause to order 100 pieces of bacon. Just bacon. It was for a Tweetup called #vBacon, and I was not kidding. To the extreme credit and creativity of the staff at Cable Car City Pub, they brought this out. 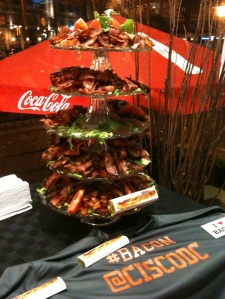 Behold the Tower of Bacon!

That’s right, it’s a tower of bacon. Essentially a deconstructed BLT, lettuce and tomato served as garnish. It was bacon shock and awe. There were pictures taken, poses with, bacon inception even. 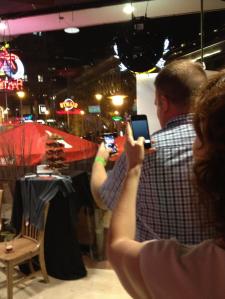 I’m well-documented as being a bacon fan, and this bacon was tasty. Lesson here, sometimes, when you have an event, less is more. Beer and bacon, yes, that is enough. They tried to push me into fancier appetizers, but I kept saying, just bacon please. The result was 150 happy technologists. 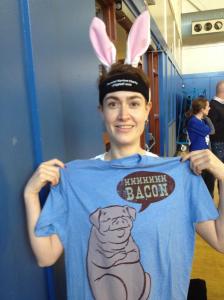